skip to main | skip to sidebar

The Adventures of Huckleberry Finn

Huckleberry Finn lived in the little town of St. Petersburg, Missouri. His father was the town drunk. Huck spent most of his life fishing on the banks of the Mississippi, sleeping in doorways, and having great adventures with his friend Tom Sawyer.

Things were always pretty dull until Huck and Tom discovered hidden treasure. They found twelve thousand dollars in gold. It was money that had been buried by robbers, so Judge Thatcher decided it was rightfully Huck’s and Tom’s. Each of them got six thousand dollars. The judge put the money in the bank for them and each of them got an allowance of a dollar a day.

Unfortunately, Huck’s father, Pap, was a drunken father. He seldom went home. Huck was scared of Pap because he hit Huck so much. He often forced Huck to withdraw some money from the bank.

Every once in a while Pap locked Huck in the old cabin and went to the store to trade fish for whiskey. He would fetch it home and get drunk. Then he would lock the door at night and put the key under his head alongside his gun. Huck couldn’t stand it any longer, so he planned to escape.

Huck found an old rusty saw with a broken handle. When Pap was away, Huck started sawing the end of the cabin behind a table. It was a long and tiring job! Before running away, he tried to design the place in such a way that people would think that he was killed by someone.

Huck headed for Jackson’s Island. Then he met Jim, a slave who escaped from his master. They became good friends and experienced many things together. They floated towards freedom on a raft down the Mississippi river. On their journey, they also encountered thieves and liars who said that they were a king and a duke. These two men were very cunning. They liked to lie to and deceive other people. But finally, Huck managed to reveal those two men’s bad deeds and expose the frauds.
Note: I summarized this story from the novel The Adventures of Huckleberry Finn by Mark Twain, published by Baronet Books, New York.

Posted by HENDRO DARSONO at 3:44 AM 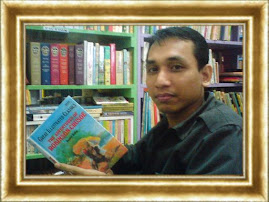 Visit My Other Blogs:

Want to know more about English proverbs? Read this book.

Written by Hendro Darsono and published by DIOMA Malang

Thank you for visiting this blog

Leave your messages in this shoutbox